It seems one Anto_capone tried to rob me whilst I was travelling from Widu to Cork on the 25th, though I saw him off in swift manner, I thought it best to report the crime so that perhaps he can be stopped from attempting to rob others. 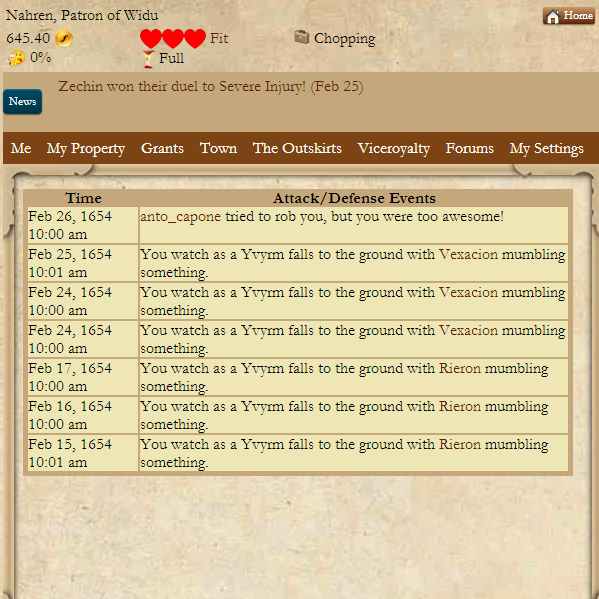 Nortad enters his office looks around files old cases away and checks to see if there are any new cases.
Top

This army has no business randomly attacking a traveller who is accompanying a new Bravian citizen-to-be. They also have no business leaving people on an attack list just because they have been in Zuan's council in the past.

Nothing will probably be done about this, but I thought I'd let you know anyway that I should be able to travel to Bravia when I please as my fiance is going to live there. The army of bovine excrement are not to decide on behalf of the whole viceroyalty who can travel through and who can't.

"It's alright, you wouldn't be the same if you were nice."
Top

You are a past revolter in Bravia City... Twice.. How you got away with nothing because you had friends in the council is kind of ridiculous considering you were the only Fenian in Bravia City involved in those times..

So save the violin.. You wouldn't get away with your play revolts everywhere you go just because..

~Mated to Scarlet~ |Father to Ryker, Narezza, and Aeron| Master Sorcerer, Sargent, and Priest of Cork ~Drachau of Tsera Fuerte~ "Pain is erased when inflicted upon others."
Top

Considering that I am moving to the lands, and was offered an escort by my fiancee to settle here, this is a bit appalling. If you wish to compound it being on official business bringing the large statue for Lord Blackhawk's memorial, I suppose it looks even worse. Unless there was issue unknown to us, this passage for my fiancee and myself was approved through the proper channels. Thus, adding my own to this formal list. Disappointing.

As our Public Prosecutor, marslynn, is listed as a defendant in this case, she has been removed from that office for the duration of this event. As soon as I have appointed a new Prosecutor we will move forward with the investigation.

Nikola drafts a letter to the Public Prosecutor and leaves it on his desk.

I withdraw my complaint on the advice of the Public Prosecutor. I will have to trick dear Cas into a night in jail some other way, I think.

OOC: In case anyone is wondering, this was just a bit of fun that Casimir suggested and I agreed with. However, the Public Prosecutor did not agree with the plan, so we will have to try another way.

The office was starting to feel like her home.Each office had a piece of her home, and one even had a miniature tree house inside to make her pets feel at home. Once she sat down in the mayor office, she scanned through the documents in front of her. Her blue eyes combed over the possible proposal of a law change, which made her scan through the current laws set in stone. "What the seven hells is this?" The murmur wasn't overheard, but she sat still for several minutes. A sigh passed through her lips, and she stood from the desk departing in a hurry towards the Public Prosecutor office.

Once there she pursed her lips, and placed the copy of town laws down. "I wish to report a crime. I'm the criminal, and it would appear..." She leaned over and pointed to the law she had read earlier. "I am turning myself in as the sheriff and the mayor of Bravia City. Which according to the laws of Bravia City is an abuse of power. I have no wish to change this, as I think I can uphold the sheriff position until Ssast is ready to retake it." Quietly she scolded herself for not drinking whiskey before entering the office. What kind of great-great-great-great-great granddaughter was she? Her nose scrunched upwards, as she moved her weight from one leg to the other awaiting the response of the prosecutor.

Oh how slow the times had become. Marcus was rather enthusiastic to become public prosecutor...that was until he realized crime in Bravia was at an all time low. Most days he would visit his office simply to chat with others, discuss topics of interest with the councilors or just to simply pass time. Today was no different. As he sat in his chair with legs crossed ontop of his desk he tossed bits and pieces of chicken towards the corner of the room where a young dire wolf would leap up and catch the bits with is mighty fangs. "Good girl, Marta. I don't care what Olympia says, I'm keeping you." He tossed another piece of meet that the canine caught with little effort.

Suddenly, the doors to his quarters burst open causing him to almost lose his balance on his chair. Quickly his feet found the floor to stabilize him while he tried to make sense of the commotion.

Before he could even put a word in she had already started on her explanation. Marcus...was at a loss for words. She was turning herself in...which was an abuse of power...huh? The man shook his head then pinched the bridge of his nose. "Ambra... first off, by turning yourself in you are not abusing your power. You would have to put yourself under arrest as a sheriff then turn yourself in which would then be an abuse of power, technically. Right now you are just telling me you are turning yourself in as a citizen of Bravia. Secondly, if you don't turn yourself in at all there is no crime taking place. Maybe you should lie down?" Where did this even come from? Did she want to go to jail or something? Was she putting fermented fruit in her muffins again?
Top
Post Reply
69 posts