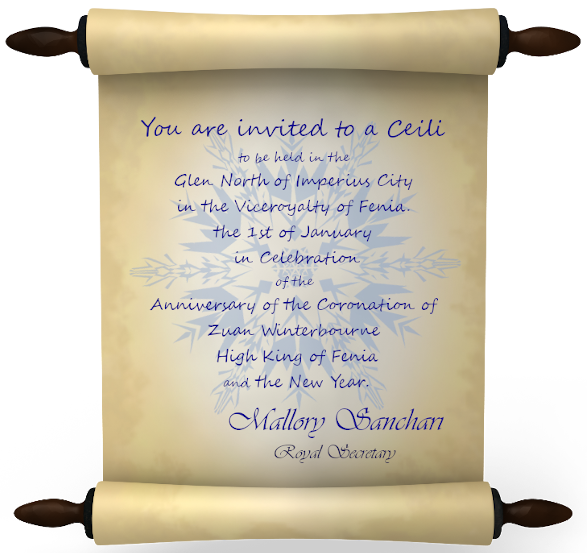 by Varann
A promise is a promise" thought varann as xie wanders to the glen despite how tired xie felt. Xie wore well what xie usually did but be cause of it being dark by the time xie started out xie had removed the bandana.
Soon xie came to the rings of Vardos and started to look for Mal

by Mallory
Her eyes were moving over the grounds, the massive space was alive with fires and bright cloths, cushions, and food, but she was watching and waiting. A shift in the feel of the air around her told her someone was arriving and she looked over before running to where Varann was, throwing herself into xer arms. "You came! You really came! I was afraid you might be too tired. Come and sit by the fire with me? We can wait on others to arrive," she babbled a bit when she was happy and tonight she was really happy. The stars shown brightly overhead, the moon glowed at a crescent. She pointed to the one of the blankets laden with cushions, plenty large and plenty soft. "Please?" her smile is bright and relaxed, finally becoming at peace in the night.

by Varann
Xie chuckles and lets Mal guide xer to the cushions grabing an orange juice on the way.

by Mallory
Mele smiles and pulls one of the low tables over to the blanket and cushions she'd selected, so that Varann could place her drink somewhere. She couldn't stop the grin that widened at the news, "I love music that will be lovely. Most dances aren't done with partners, but in groups or in lines or squares. So nothing embarrassing I promise. If I had to follow someone exactly I would likely fall on my face. I'm not the most graceful creature in the room." she pressed her hands over her mouth and stemmed the tide of words flowing out, "Sorry. When I'm nervous I babble." She quietly curled her body into it's usual tuck and settled onto the giant cushions that she wasn't sure Aishe and Zuan knew they'd paid considerable money to have done in time. The cushions ranged from twice the size of a single bed, to simple single cushion just big enough to rest beneath a human bottom. The fire would be crackling soon, she hoped. She really did not want to light it, though she did know how.

by Elisa
Today was finally the day. Elisa had been excited to go to this party for days, ever since she was invited. She was nervous as well as she had never been to a ceili before. By conversation in the tavern she had learned it was custom to bring food for the party. After thinking about it she had decided to make corn mush, it was a simple dish but at least she wouldn’t arrive empty handed. It was not that difficult to make either, just boil the corn and then thicken it a bit with cornmeal so it would set and be solid enough to be picked up and eaten, instead of needing a spoon. Apart from preparing the food she had been preparing herself. Making sure she washed properly after working on the field, even though it was cold. After that she had picked blue clothes to wear, they were still new. Well, new to her anyway. She hadn’t worn them yet since she received them. Zipporah and Mallory had given her the clothes and many other very useful items for her home. She had been very happy with them as she had been a lot warmer now. But now with the party she was very grateful she would not look like a beggar as well.

by Varann
Xie nudges Mal "I think we have a guest Anam,"

He gazed silently at each of the folk looking on, unaware of any tradition or custom as may be dictated by decorum. Instead he raised his voice ''Well met fellows'' he hailed all as one, then turned his gaze towards Mele and Varann ''Good evening both, he said with a smile ''and good evening to you!'' he called to Elisa.

by Ella
So coooooold. The outfit that had been picked out for her didn't help to keep her warm at all. Ella was one to wear a long sleeve black dress in the dead of summer just to feel warm. She was often found sitting in the middle of a fireplace, basking in the heat of the flames that licked her skin. She was always, always cold. She pulled a dark navy cloak around the outfit. She was still unsure about it despite being told it was very pretty on her. Ahh well, she could step out of her comfort zone for a few hours.