"Well, I just saw on the forums, that Fenia and Imperius are trying to name their streets.

Looks like we have just one ("The main street"), although I don't know which one it is.

I'd be happy to put the names of the streets, lanes and paths on the map of our town..."

... and she went back to her everyday tasks at Ramzunius home...
Top

I'm a little confused. Where do outskirts of Bravia end on this map?
----
Added: and yes, i would like to add my field and a tent (look for Orcish village) a bit down road to SE (I suck at reading maps, so right and down, to be clear)
Top

( OOC: So, I am new here also, and thus I don't know everything. But the way to get property is to go to your property menu and click on house. From there, you will see an option to buy. It is cheap to buy most lots - I paid 20f for my lot on Strawberry Orchard Lane, which is a country road. If you don't like the road names, you can send a message to the mayor asking for a new road name. Some of the Bravia City road names are ... bizarre and those don't have any houses on them, not surprisingly. Also, you don't have to actually build a house on your lot yet. You can camp on it in your tent. If you want a place far from town on your road, use a higher number street address, as the higher the number, the greater the distance.)

The map isn't official, I don't think. So you could buy further out than me on my road and be the farthest from town. Or, you could buy on a new road and that could be out on the far edge. I hope that helps? )
Top

[ OOC: You are correct. Technically, you get your property IG, via your property tab. This map is an 'unofficial' map, player designed and run map of Bravia City (and Imperius). Originally, there was no map or anything like that to imply where things are or how the town is set up. It was up to us, as players, to create something to reflect the 'vision' and help smooth RP. Ramzunius was the brave man to tackle the project! This map and IG setup are not directly connected, however, in terms of "claiming here equals a claim IG".

With the IG houses being a newer game addition, things don't quite match up with this map and the IG streets and living situations (i.e. neighbours). I am wondering if the amazing Ramzunius would be willing to take the newer IG setup and rework the map to better reflect it. It could be a bit of a project, but I would be willing to help out however I could.

(I don't have an OOC contact for Ramz, who hasn't been back since quite a few months, and is now in deleted status, but the site might still be workable, I haven't really tried to work with it.)
Top

If that's the case, it may be our best bet to design a new map. If no one else is interested, I am willing to dabble it in.

[ OOC: I also have a (very) rough draft idea going. It's a bit different than yours, such as the river is on the top right hand of the map as it is in the map of all of Secfenia, and then obviously, the overall style is very different.

Not everything is on this map right now, just a most of the important things. I also didn't bother making a key yet, so it's got some ugly text on in it to help show what is what. There are two different house styles I would love feedback on, if we go this route.

Things that will be added / changed if this map gets further developed would be:

Now, with all that said, feedback is welcomed! ] 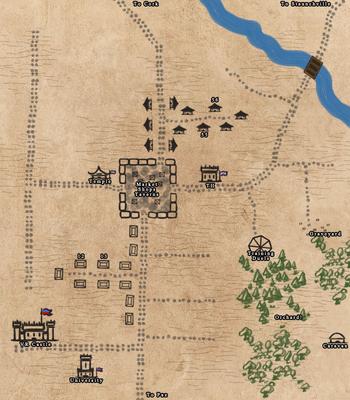 (OOC: Castles are the town center, the walled fortress surrounded by markets and homes, as that is where people run to for safety in times of war. I would suggest an "urban" center with the castle at its heart. The university and cathedral would likely be close by, along with Town Hall. Main Street would go through the heart of the city, leading up to the castle gates. I suspect that the farms owned by people who live on Main Street are out in the country, not in the middle of the city.

[ OOC: I was intending on putting some sort of wall around the VR castle as well as the more central of town. The reason I put the Castle where it is is since it's a Viceroyalty Castle - which in my head for some reason, there's only one of those per Viceroyalty, we just have access in each VR town to it. That's also why it's close to Paz, since Paz is the other player active town in Bravia.

I do agree though with a lot of what you said and am going to rework things a bit. I was really rushed when I played with this yesterday.

Return to “Town of Bravia”