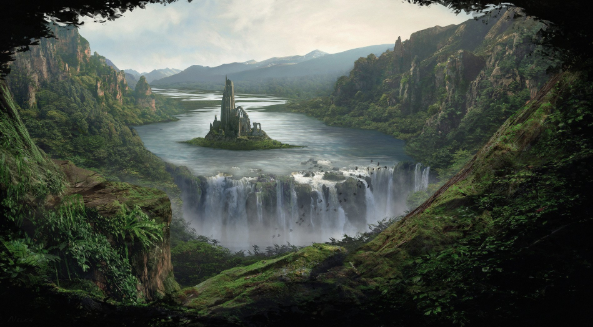 He had been given some land for the battle in Widu. A beautiful waterfall he hiked to regularly it was far from any town but thats how he liked it it meant if a magic experiment went wrong there would be nobody else to get hurt. He stood on the water in the centre just back from the waterfall. His eyes surveryed the area and he nodded to himself happy in his decision, his eyes closed slowly and he started to inhale deeply the waters around him in a large circle swirling as he finishes his inhale he raised his arms wide at the sky. A bolt of lightning pierces the clouds blowing them apart the birds take flight from fear their calls unheard over the sound of the thunder as it hits directly infront of him. As the flash subsides and the boom echoes out of the valley an island has appeared infront of him topped with an old grey tower.

He strode forward a smile on his lips he waved casually to one of the banks a small bolt hitting there that now stood a stone circular platform. Its identical twin on his island when activated on the island it would allow one to teleport from one to the other. He smiled to himself thinking he should just make people try swim across if they wanted to visit but the portal would help for those he invited. His arms behind his back one hand clasping the other wrist as he strode into his tower the door opening on its own as he approached the sounds of assorted monster noises escaped once the door was open and the island was once again silent once he entered and the door shut behind him.