The sun was setting over the lake, casting orange and pink ripples across the water. Zehara lounged against the windowsill at the top of Nettlebane Tower, a drink in one hand and a lazy smile on her lips. It could be nice, sometimes, she supposed, this mortal realm. Not that they hadn't had nice sunsets in the fae realms. Magical, even. But there was something so... real about this view. No magical enhancements, no sparkling fae lights. Just nature, in all its glory.

Zehara took a sip of her drink and turned back to the room. It was meant to be a study, but it looked more like an attic that had recently ticked off a tornado. She sighed. Even as she had started to get used to this place, she still hadn't figured out how to do useful things around the house. And now that she had been granted Nettlebane Tower, she just had more space in which to be a giant mess. She had hired a housekeeper/cook/general factotum. But the blasted woman was afraid of this room. Claimed there were monsters lurking in the shadows or some such nonsense. Zehara pushed a box of junk off a large, squishy chair and flopped down into it. Monsters, pff. The only thing lurking up here was Zehara. Granted, she did have a tendency to brood lately. She was homesick. This tower, this land, even the family she had found here - they weren't really her home.

"Martine!" Zehara shouted, after gulping the last of her drink. She heard a crash from below, and then heavy footsteps coming up the narrow, winding stairs. As always, Martine stopped just outside the doorway, glancing nervously around the room. "What's for dinner?" Zehara asked. At least Martine could cook, thank the Mother. Zehara had still never figured out how to make anything edible.

"Baked fish, miss," said Martine, in her rough, scratchy voice. Zehara often wondered if someone had tried to choke the boring out of her and left her permanently with half a voice. She pouted at the proposed menu. "Again? DIdn't we just have that?"

"Not since last month..." said Martine, her face the picture of simple confusion.

"That's practically yesterday!" whined Zehara. She was still unused to the pace of mortal life. There was so much more variety in the fae realms. Well, there had to be when everyone lived several centuries. You would get bored of life fast, too, if you had to eat baked fish once a month for 500 years!

Martine began to look nervous, as she always did when Zehara fell into her more petulant moods. "I think the potatoes are ready, I could bake some up with cheese, if you like?"

If possible, Zehara's lower lip protruded further. "Fine," she muttered, turning back to stare out the window. Potatoes, bah! What a depressingly dull food. No wonder mortals died within 100 years. Killed by boredom. And starch.

After her confrontation with Ella, Circe had been bouncing around different parts of the Kingdom. Honestly, she did not see what the draw was for niece. Everything seemed so...upright. A King and two Queens plus a bunch of nobles acting all proper-like. To her surprise though, Ella had even found some familial connections here in these lands. Well, the Blackwoods were known to enjoy the art of procreation so that wasn't too big of a surprise. One of the relatives she had heard about was a cousin, second or maybe third. She had no witches blood left in her veins for the line had been diluted. But, the girl was a faerie and that intrigued Circe. What intrigued her even more though was that this cousin was apparently kicked out of the realm of the faeries for misbehaving. Certainly, she could provide some fun.

It was a warm day by the lake Circe arrived at Nettlebane Tower. There was a small bridge over the water to a door which she knocked on. Her arrival had been unexpected, of course. What fun was it to make plans?

Zehara was in the middle of an elaborate and extremely messy attempt at painting when she heard the knock on the door. She had whined about boredom enough that Ella had snapped, "Get a hobby!" Pfft hobbies. Silly things mortals did to distract themselves from their own impending death. Pathetic. But Zehara had nothing better to do, so she gave it a try.

First she tried an excruciating mortal pastime called "bird watching." Within ten minutes she had decided she'd rather die at the pubescent age of 50 than spend another hour staring at twittering, fluttering nincompoop birds. Next she had attempted to learn to cook. This seemed both practical and time-consuming, so surely it would be better than staring at pea-brained fledglings. However, inevitably, it had ended with a cauldron over Martine's head which the woman claimed had not stopped ringing in her ears to this day. Martine had decided that a quieter pursuit that kept Zehara contained to her tower study was in order, so she raided a nearby bookshop and brought home a trunk full of reading materials. Zehara slogged through one mortal history for the better part of the day before she set the lot on fire. She had only read through about 200 years of time, and yet the blasted mortals all died so fast that the main characters had changed 5 or 6 times already! Zehara could not understand how anyone could be expected to keep up with all those different names. Worse, they didn't even die in interesting ways, but rather had a tendency to succumb to childish infections and pop off before they had a chance to do anything at all. Pathetic.

That was when Martine procured the canvas and paints. It still kept Zehara confined to her study, but allowed her to be slightly more active and to indulge her proclivity for chaos. Paint-splattered, Zehara gave another giant swish with the brush, and stood back to admire her work. "I'll call it 'Mortality,'" she decided, when the knock sounded below. "Martine!" she shouted, not even remotely intending to interrupt her "work" for something as mundane as answering the door. She dipped the brush in red paint and added a few more splatters of blood to the canvas. The knocking sounded again, causing her to jerk her hand. Zehara threw down the brush in anger and stomped to the study door, throwing it open and shouting again, "Martine!! Get the damned door!" Hearing no response, she muttered to herself, "Where in blazes is that girl?"

Since her painting was clearly ruined, Zehara threw up her hands and galumphed downstairs to get the door herself. "What's the point of a bloody housekeeper if she can't even open the bloody door..." she could be heard muttering as she threw open the front door with far more force than was necessary. Zehara was a vision of chaos standing in the dark doorway of the tower, paint splattering her clothes, face, hands, and even hair. Her amber eyes flashed with something bordering on mania. "Well, what is it?" she demanded curtly, leaning on the open door, her other hand braced on her hip.

The whiteness of winter wrapped the city and its environs in a soft, fluffy blanket. Snow covered everything: the rooftops, the tree branches, the streets and paths...everything the eyes could see. She liked this time of the year. She liked kneading snowballs and throwing them at whomever she could, she liked taking long strolls on the snow-covered pastures and she enjoyed inhaling the fresh cold air in her lungs.

She hadn't lived in this realm longer than for about a month, yet, fondness of the City of Fenia and the sorrounding lovely landscape has already started to grow in her heart. Also, she had a task now, too, given by her cousin Ella: she was made Deacon of the Fenian Cathedral. And where could she find better inspiration for her sermons, than in the beauties of Mother Nature, what could inseminate her always discursive fantasy, then the snow-covered hills and valleys, or the frozen lake?

Thinking of the lake, that was exactly where her present walk was heading for. She had recently been given a new property, Nettlebane Tower, together with the matching title of a "Lady" by the High King of Fenia. The honour was huge and she was immensely happy about the recognition, even though she was not sure it was totally well-deserved. Not yet at least. However, it was only up to her to prove her worthiness. She had to keep up her work as well as she just could to prove, she could indeed be worthy of her new status.

The path was leading her closer and closer to the lake. That was where the tower could be found. Ratty, the small squirell - her faithful, and only, companion since the very day of her arrival in the realm - was cowering on her shoulder trembling with cold. She felt pity for the little animal. Taking it in her arm she covered the small body with her clothes while walking closer and closer. Then after the next bend of path finally the breathtaking sight of the slender, tall building unfolded. 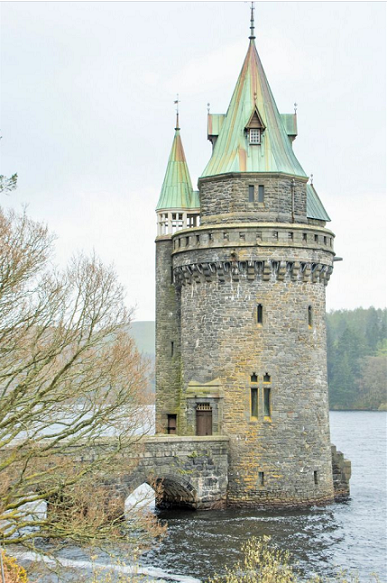 "Here we are, Ratty" she told the small animal trembling in her arms with pride in her voice. Her new home was standing there in front of her in its full grace. A satisfied smile appeared on her face."We have arrived."

She was sitting in her study set up on the uppermost floor of the tower, wrapped up in her thoughts. The rays of summer sun shone through the window panels, filling the whole room with light. She was rather calm and satisfied, as she recalled the past months.

Her fingers wandered absently on a piece of parchment. One could have though it was one of her notes she had prepared for the upcoming mass, but in fact it was something else: her appointment as the Mistress of Nettlebane Tower.


A shy smile appeared on her face as she read the document. Indeed, she had been serving as Deaconess, then Priestess of Fenia ever since. For six months now. And she loved the task. She really felt she had much to tell, much to convey to the inhabitants of Fenia. And whenever she noticed a smile on a face after the sermon, she felt the preparations was worth the effort. Besides, she had always loved good stories and nice poems, so what could have been a more fitting task, than to share all these with her fellow creatures?

Additionally, she liked the tower's seclusion and close vicinity to the nature. Whenever she opened the window, the amazing view of the Fenian lake captivated her soul and filled her heart with admiration. Sometimes it did come to her mind, that it would be nice to share all these beauties with others, but then her glance always wandered on the pile of sheets lying on her desk - her notes she made for her sermons. Even though she had a family - the Blackwoods -, somehow her tasks always kept her occupied enough not to go and look for them.

Was she lonely? Maybe a bit. But was not totally alone. Ratty, the small red squirrel had soon got a companion in Belly, the golden retriever, who proved to be a huge help for the young lady, when she decided to go out fishing. And there was the old plow horse, whom she called Alister - she had no clue why.

Coming to this point in her meditation a bright smile appeared on her face. She was satisfied. She stretched out her hand for the quill and took another sheet of paper. Yes, the sermon for Sunday, her next story, was already waiting for her to be written.